Throughout the past 16 months of COVID-19, Chipotle CEO Brian Niccol has been one of the few fast-food executives consistently in the corner of a dining-room resurgence. “And I think if we give them a great experience, they’ll come back disproportionately to Chipotle,” he said Tuesday.

Despite lingering uncertainty, namely around the Delta variant, it’s already happening at Chipotle. Niccol said the fast casual’s lunch business surged in recent weeks—“the best piece of news that I’ve seen in our data”—as weekday visits and the rebalancing of suburban versus urban traffic takes shape. Further proof people are returning to work and “more normal” behaviors throughout the day.

Chipotle recovered roughly 70 percent of in-restaurant sales in Q2, the three-month period that ended June 30, while retaining about 80 percent of its digital business. The result being some of the most robust figures in brand history, and a return to levels not seen since Chipotle’s 2015 food-safety crisis evaporated about half of its market cap and sent the brand on a multi-year journey to win back consumer trust.

But two metrics stood out above the rest. One was Chipotle’s trailing 12-month average-unit volumes of $2.4 million. The underlying rate is now above the brand’s historical peak of $2.5 million. When Niccol left Taco Bell for Chipotle in mid-2018, it was a question he fielded often. Could he get Chipotle back to its prior summit? Naturally, his answer was yes, and when Chipotle achieved it, the brand would start thinking bigger. “We have growth strategies that will take us to the next leg of our journey, $3 million AUVs,” he said Tuesday.

The other number to flash in Q2 was restaurant-level margin of 24.5 percent, more than double the 12.2 percent reported last year during crisis conditions. But again, this represented the highest margin since 2015, and the days before Chipotle’s E. coli disaster.

So, from multiple baselines, the brand is starting to look a lot like the category juggernaut Niccol saw in its rearview a couple of years ago. Just turn to the stock market, where Chipotle traded for $1,735.85 early Wednesday. Shares closed at $279.31 on November 24, 2017.

Yet there are key differences. And why Niccol on Tuesday said “the opportunity ahead of us remains significant.”

Chipotle’s digital sales lifted 10.5 percent in Q2, bouncing off COVID-inspired growth of 216.3 percent in the prior-year period. Digital settled at 48.5 percent of Chipotle’s total sales, or about $916 million.

What’s alluring, Niccol said, is there’s a multi-billion-dollar business facing Chipotle that over time is only going to gain additional access. While COVID undoubtedly jolted digital channels due to dine-in closures and hesitancy from guests, Chipotle is still in the early innings of its strategy to meet a changing consumer where they want to go.

Chiefly, through Chipotlane order-ahead windows. As of June 30, Chipotle had 214 of these across the country, including eight conversions and six relocations. The brand opened 56 stores in Q2, with 45 of those featuring a Chipotlane. For the full year, Chipotle believes it will open somewhere around 200 restaurants, and 70 percent (about 140 units) will fall into this category.

New Chipotlanes are opening with sales 20 percent higher than traditional formats. And over the trailing 12 months, they continue to drive about a 15 percent higher overall digital sales mix. Importantly, its skewed heavily toward order ahead—Chipotle’s highest-margin transaction, especially compared to delivery, where the brand has taken price increases to offset pressure (it’s done the same of late to balance wage increases).

“As I’ve said before, the best returns we can generate are by investing in more Chipotlanes,” CFO Jack Hartung said.

Chipotle closed Q2 with nearly $1.2 billion in cash, investments, and restricted cash. So it’s in the driver’s seat, despite external challenges, like labor, inflation, and commodity headwinds.

Digital-only stores, of which there’s one just outside the gate of the military academy in Highland Falls, New York, and Chipotlane-only venues (no dining room) are going to give the chain opportunities to maximize trade areas, Niccol said. The ability to rethink mature markets and reexamine new ones. Yet the true focus area will fall on Chipotle’s combo format of the in-store option plus a pickup window.

“Because at the end of the day, I could keep talking about these are different occasions, arguably, you’re almost a different consumer when you decide you want to do digital versus being a dining room customer. So that’s what we’re after,” Niccol said.

As dine-in flowed back, Chipotle saw overlap in the 15 percent-plus range in terms of customers who are ordering digitally and in-store. It leaves the door open for a lot of incremental occasions, Niccol said.

Essentially, this signals to Niccol the on-premises visit is a different one. “As much as we’ve replicated the in-line experience online, there is still something to be said of walking down the line, seeing the food, getting the sights, the sound, the smells, and getting probably another level of customization that I think is very engaging to customers,” he said. “And they want to have that experience.” 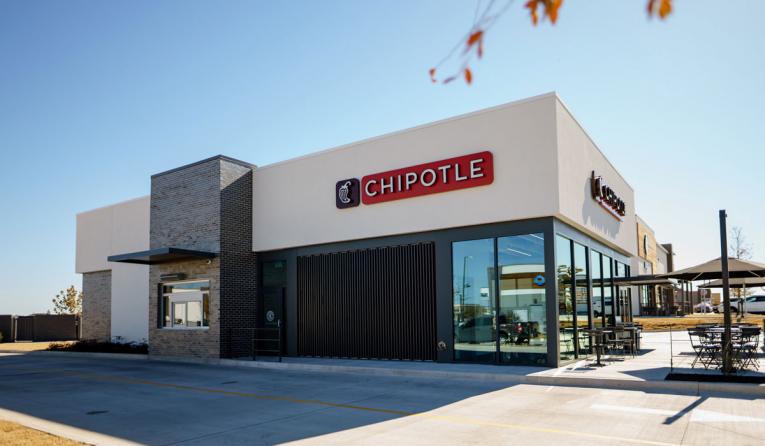 Niccol believes the overlap will go up as people return, but that the end-result is circular. “I’m hoping they’ve had really positive experiences digitally that will suggest, hey, [I] want to give Chipotle a try in the dining room and vice versa,” he said.

“One thing we continue to learn is these occasions are unique,” Niccol added of Chipotle’s digital split itself. “If you want a delivery occasion, you usually don’t trade it off with an order-ahead occasion. But the ability to have access to both is really powerful.”

On the same token, dining-room-only guests will be greeted with messaging on rewards, delivery, digital ordering, and hopefully, Niccol said, decide to give it a go. It’s a world where the two businesses serve different needs, and prove incremental and complementary for Chipotle.

The brand’s quesadilla is a good example. Introduced as a permanent digital-exclusive offering in March, it’s appearing in about 10 percent of Chipotle’s transactions. And it’s also luring in new guests, Niccol said.

This is unlocked through the fact Chipotle essentially operates two businesses out of every restaurant, with a second make-line that alone boasted AUVs north of $1 million last year.

Chipotle has kept innovating with digital, too, introducing a concierge chatbot, “Pepper” to its app, which can answer common guest questions and free customer care teams up to help with more complicated issues. Chipotle also gave guests the ability to easily rate their order in the app and online, “providing our restaurant operations teams with actionable insights on how to maintain and improve the digital guest experience.”

Chipotle’s rewards program ballooned to 23 million members in Q2 from fewer than 10 million headed into 2020. The company launched the program’s biggest update since its 2019 inception last month. “Rewards Exchange” allows users to unlock more items, more often. Previously, points only went toward free entrées. Members can now pick from 15 different options, including “Chipotle Goods.” Diners can also redeem points to support non-profit partners of the brand, like The Farmlink Project.

Niccol said the update should improve engagement and frequency. And more enhancements are coming by year’s end. “While the loyalty program is used to help drive frequency, our marketing efforts are primarily designed to bring more people to the brand,” he said. “The combination of reach-based media and a successful frequency driven loyalty program make a great one-two punch that both brings in new users and increases transactions with our existing customers.”

Additionally, Chipotle’s brisket was validated by the chain’s “stage-gate process,” meaning it’s going to enter the seasonal rotation. Expect to see a cadence of on average about two to three menu innovations per year.

All of Q2’s metrics and recent momentum has Chipotle executives confident in a long-term target of 6,000 North America units. “We have the cash to do it. And we also know there is no better investment with our cash than to build more Chipotles. So, that’s always going to be the first priority,” Niccol said.