One of Brian Niccol’s biggest surprises when he joined Chipotle in February 2018 sounds crazy, he admits. Even after nearly three decades of blazing the fast-casual trail, “we still have a lot of people that are experiencing the brand for the first time,” Niccol said Thursday at the Piper Sandler Consumer Marketplace Conference.

Three-odd years ago, when Niccol left Taco Bell to succeed Steve Ells at Chipotle, he recognized digital as the chain’s greatest project. But what Niccol didn’t quite grasp was how it would materialize. He initially assumed digital would be attractive to existing users clamoring for it, and it was. Yet he didn’t expect the volume of fresh users that flooded in. Or how Chipotle was, in reality, still a new brand “in a lot of places where we open our restaurants.”

“That presents a unique opportunity for us to be able to move these new users up that continuum and really convert that value into meaningful value for our company,” Niccol said.

What digital also accomplished, he added, was to remove anxiety around how consumers order at Chipotle. That’s hardly the case now.

Even at just 2,800 locations, Chipotle’s rewards program touts more than 20 million people. In April, the company said roughly 60 percent were active, ongoing users. Chipotle entered 2020 with fewer than 10 million, which, again, reflects Niccol’s comment about the brand’s digital introduction to a surprisingly large base of consumers.

Starbucks is often labeled, along with Panera Bread, as the gold standard in quick-service loyalty. And the java chain reported a company record 22.9 million 90-day active members in Q2.

By Chipotle’s math, it currently serves somewhere in the neighborhood of 12 million active rewards guests. A little more than half of Starbucks’ count. Yet Chipotle is outpunching its weight. Starbucks ended 2020 with 15,328 U.S. locations. Chipotle had 2,750.

It’s been difficult at times in recent months to understand guest behavior and what’s driving visits. Are they returning to restaurants because they can? Is it due to stimulus checks? COVID-19 case numbers on the decline?

Niccol said, for certain, he thinks stimulus checks generated a tailwind. But the bigger push came from the fact extra funds coincided with reopenings.

“… Savings have never been higher, the big consumer desire to have reunions and get out and be a consumer again, get on with their daily activities, creates occasions where you’re going to eat away from home and eat at a restaurant or, at a minimum, get that food from a restaurant, maybe eat it somewhere else,” Niccol says. “So we’re seeing it play out in people behaviors, getting back to what they were pre-pandemic and then hanging on to behaviors that were created during the pandemic.” 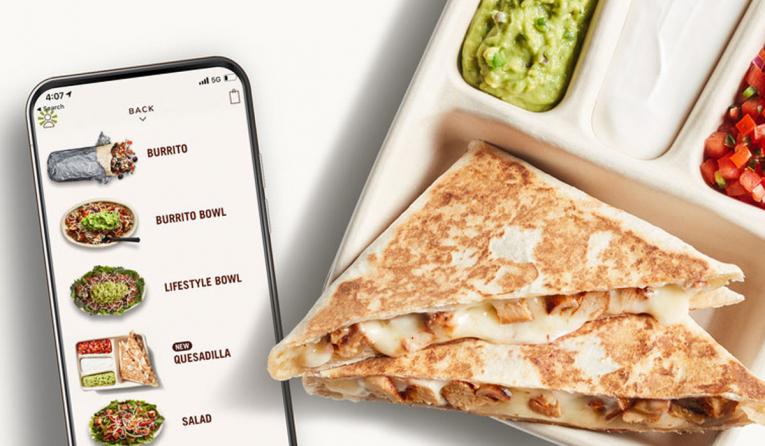 “These are really two distinct occasions that people want to have access to great food with integrity,” CEO Brian Niccol said of digital and dine-in.

And it remains an early innings process for Chipotle. The chain’s rewards program went national in March 2019. It followed the much-maligned Chiptopia story in July 2016. In that case, Chipotle ditched the standard points-based platform in favor of a three-tiered, summer-focused, three-month promotion tied to the number of times customers visited. By the end of the first 30 days of Chiptopia, there were more than 3.6 million participants who accounted for 30 percent of transactions. As September rolled around, Chipotle said more than 3.1 million people registered and had used Chiptopia cards. About 1.2 million users signed up that August alone.

While that sounds promising, it got dicey.

The program was structured where guests earned free meals after their fourth, eighth, and 11th visits each month. So if they bought 12 burritos over three months (four a month), they were eligible for four free burritos. That 33 percent return rate was far from a long-term strategy for Chipotle. Additionally, the company ended up forking out roughly $20 million to more than 85,000 Chiptopia members who qualified for the top draw—a catering package for 10 worth about $240.

The issue was this—Chiptopia gave out burritos, but it didn’t truly inspire loyalty. And Chiptopia did little to serve as a perception tool during a time when the brand was still battling back from food-safety woes.

The program was also complicated for average customers and generated most of its interest among loyal users. Unlike today’s version, what it didn’t seem to do was inspire new guests. Morgan Stanley wrote a research note at the time that said Chiptopia helped convince core customers to resume prior frequency. It did not, though, impact the more casual diner—those who made up 75 percent of Chipotle’s base (to Niccol’s earlier point of awareness runway). While Chipotle’s most loyal diners accounted for 60–70 percent of its visits then, the brand needed to recapture average consumers if it wanted to cross the canyon created by its E. coli crisis. And when the program ended in September, some feared it could potentially alienate customers just as they were getting accustomed to the rewards.

It wasn’t the gift that kept on giving, in other terms. Not for guests, and not for Chipotle.

The present version outlines a far different aim. Once more, closer to what Starbucks tries to accomplish versus any kind of virtual punch card. Consistent purchasing trends that Chipotle can work with, and build upon.

“We would love to get even more people into the program,” Niccol said. “One thing I will tell you is, we’re becoming a lot better at using that data, wanting to gain insights on where we need to be better, where we have opportunities, but then also the insights to really engage correctly with the various cohorts and the journeys that we’re creating. And we’re seeing that play out in people’s shopping behavior and we think we’re gaining share as a result of it.”

Chipotle’s program works through two main tenets. Guests who order get 10 points per $1 spent. Every time they hit 1,250 points, they receive a free entrée.

But importantly, Chipotle can also incentivize lapsed users and look at past behavior to try to lure users back.

Communications are individually tailored so specific customer activities prompt targeted responses. “Each digital message can vary along the customer buying journey such as the latest promotional offer on a new menu item or a more targeted offer to entice a customer that has not visited our restaurant for a certain period of time,” Niccol said earlier.

This is where Chipotle has whitespace to chase. Recently, when it launched its long-awaited quesadilla, customers received communication featuring their favorite protein based on their ordering history.

That simply wasn’t a lever Chipotle could pull in the past.

Niccol said a bevy of new users come to the business through the quesadilla proposition. And then existing customers used it as part of a new eating occasion.

The result was Chipotle’s highest penetration of new customers in March. A testament, Niccol said, to people coming back to dining rooms and, also, meaningful innovation around quesadillas.

Not to be undervalued, either—Chipotle’s ability to market a digital-exclusive product.

Come late April, the brand’s digital business maintained an 80–85 percent run rate. It credited a growing ecosystem that includes rewards, menu news (quesadilla), and the ability to meet growing off-premises demand with the same speed and quality as dine-in service.

Chipotle’s second make-line efforts ahead of 2020 proved invaluable. By the time the pandemic was in full-tilt, those make-lines alone generated sales that annualized to $1.1 million AUVs, or more than a Dunkin’ in 2019 ($968,000). 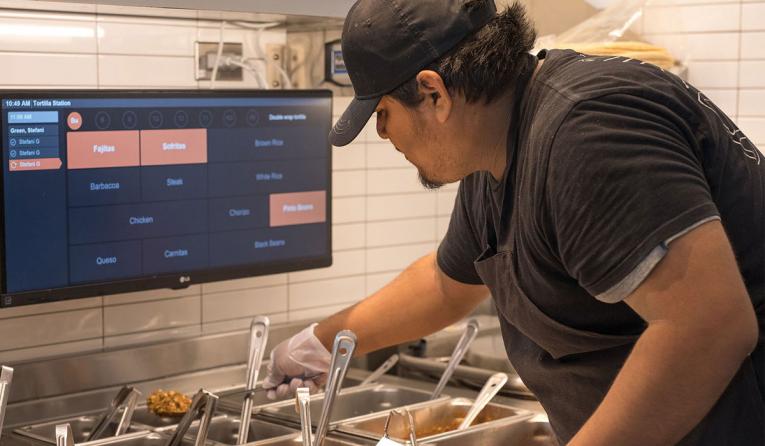 Chipotle’s second make-lines alone are generating more than $1 million a year in sales.

Importantly, though, digital orders didn’t bottleneck the experience for guests walking in the door, and won’t as dine-in surges back. Guests don’t have to wait for employees to fulfill digital orders before they get started on theirs.

The broad evolution, Chipotle said, from a commerce system to a “platform of engagement.”

Going back to the opportunity ahead, Chipotle, in Q1, said it didn’t see a ton of crossover between its dining room and digital experience. There was only 10–15 percent of guests doing both.

It’s data that leads Niccol to believe the return of dine-in occasions won’t cannibalize its soaring digital business, which grew 134 percent in Q1, year-over-year, to $870 million, or roughly half of Chipotle’s sales.

“These are really two distinct occasions that people want to have access to great food with integrity,” he said.

And why Chipotle previously said it’s taking aim at AUVs above $2.5 million, restaurant-level margins higher than 25 percent, and 6,000-plus stores.

In fact, Niccol went further Thursday. He said the company recently conducted a two-day virtual field leader conference. “When you’ve got 100,000 employees and 400 or 500 field leaders that are overseeing 90,000 employees, the clarity of what needs to get done needs to cascade through the organization,” he said.

Niccol added he’s “bullish,” on the chain’s international prospects. Just a week ago, it opened a store in the U.K. and plans to debut “some restaurants in France.” Chipotle also noted earlier in the year it believes there’s room for “a least a few hundred restaurants in Canada,” as their unit economics approach U.S. stores. Chipotle opened a British Columbia restaurant recently in Surrey, which marked its first new Canadian store in three years. The first Chipotlane is on deck for late summer, too.

Previously, Chipotle tried to grow in France (2012 to start) and Germany (August 2013 was the first) a shot. But it hit roadblocks. Press reviewers called the food overpriced. The dynamic has changed overseas, especially in terms of delivery.

In February, there were eight locations in the U.K. and 23 in Canada.

“We as a company have more levers than ever before to be successful in new markets, between our digital system, the varying asset designs that we can bring to the market, and then I think just the strength of the brand around food with integrity and the proposition that comes with that,” Niccol said. “So I’m bullish on it. But it’s still early days, but it’s going to be part of our growth story in the not too distant future.