REIT exposures to interest rates are at an all-time low, as demonstrated by new data from the Nareit T-Tracker®. REITs have reduced their reliance on borrowings, which lowered leverage ratios considerably over the past decade. The weighted average debt-to-book assets ratio of all REITs declined from 58.3% in 2008 to 50.3% in the first quarter of 2021. 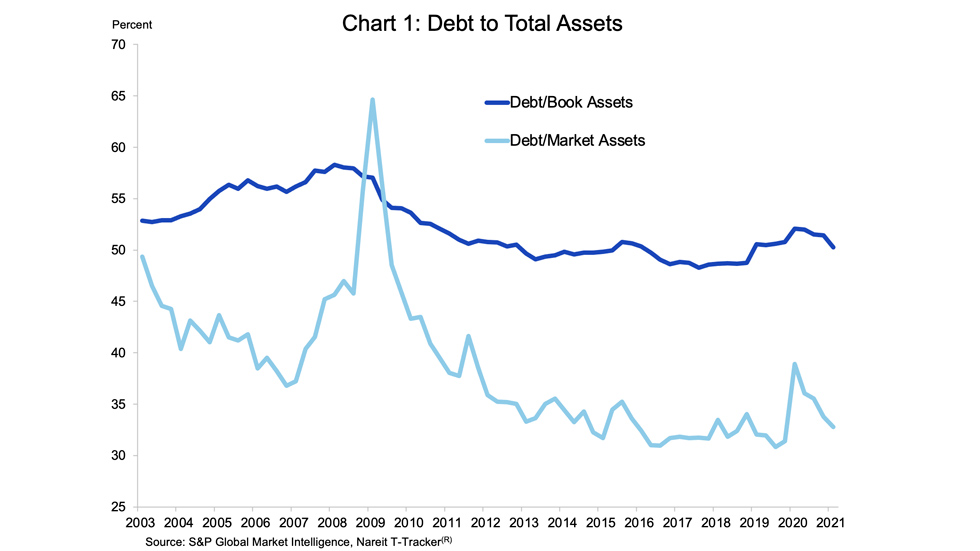 The debt-to-market assets ratio, which replaces the book value of shareholders equity in the denominator with current equity market capitalization, has fallen even more dramatically, from a peak of 64.7%, to 32.8% in 2021. These lower leverage ratios have improved REITs’ financial resilience during the pandemic, and have also brought their exposures to interest rates to an all-time low. 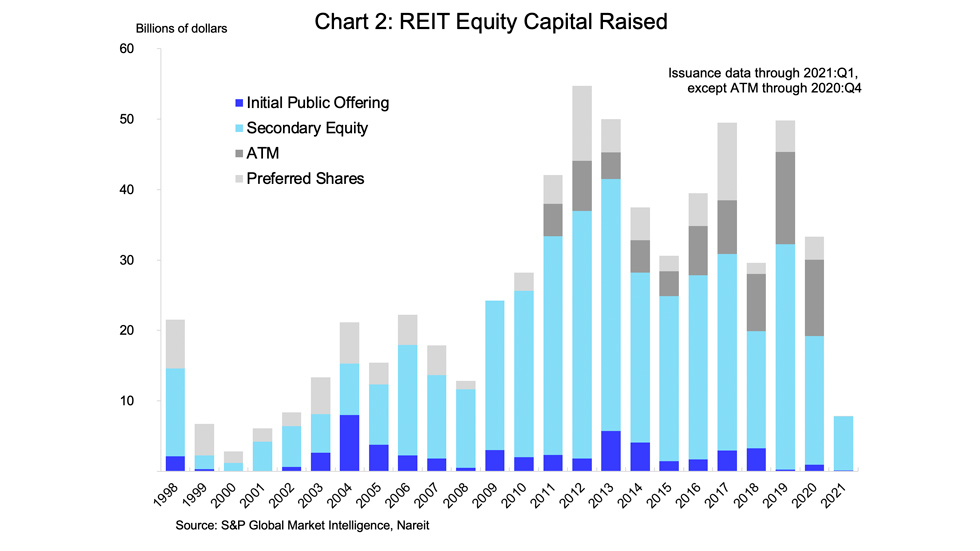 REITs achieved these lower exposures to interest rates by raising permanent equity capital to fund their portfolios. REITs raised a total of $385 billion of common equity between 2009 and 2019, including $28 billion of initial public offerings (IPOs), $297 billion of secondary equity offerings (SEOs), and $60 billion raised through at-the-market (ATM) equity programs. 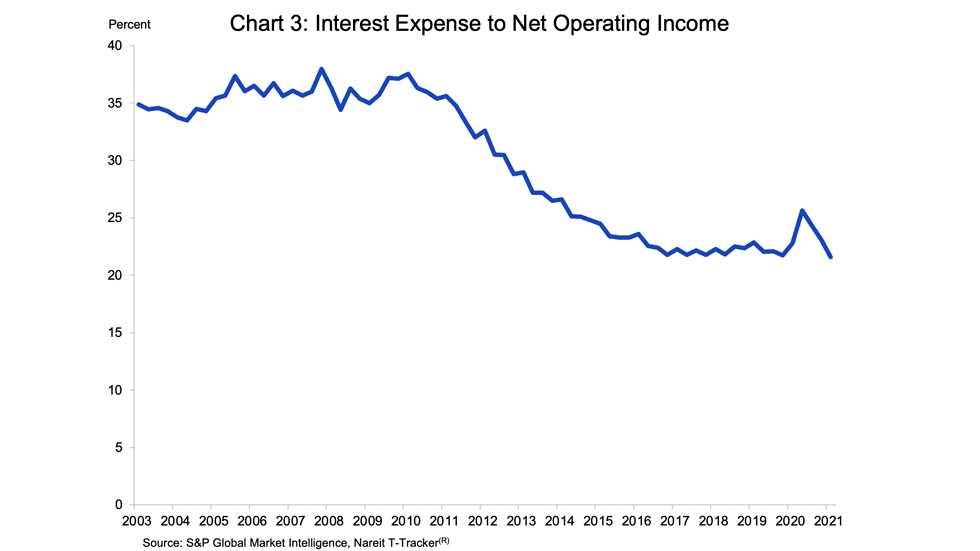 Lower leverage and decreases in market interest rates have reduced REITs’ interest expense, measured as a share of net operating income (NOI), to a record low. The interest expense share of NOI fell from 38.0% in 2007, to 21.6% in the first quarter of 2021. REITs have locked in these low interest expenses by lengthening the maturity of their debt from under 60 months (5 years) in 2008, to 87 months (7-1/4 years) today. 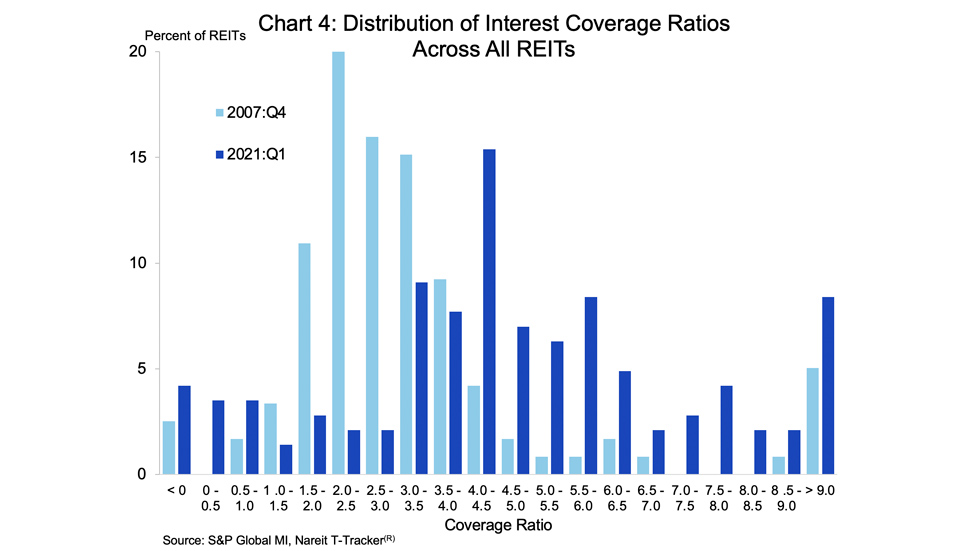 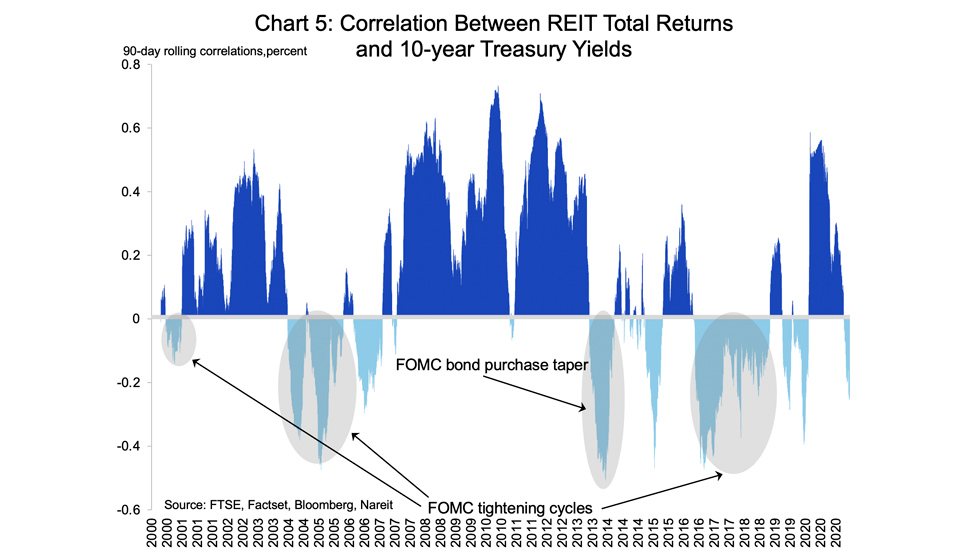 Stock market returns, nevertheless, have at times responded to changes in interest rates. The correlations between REIT returns and long-term interest rates, however, are not stable over time, but depend critically on the Federal Reserve’s policy stance. Chart 5 plots the 90-day correlation between daily returns on the FTSE Nareit All Equity REITs Index and daily changes in the yield on the 10-year Treasury note.

There have been several episodes, however, when the REIT returns moved the opposite direction from interest rates. Most of these periods were when long-term interest rates rose as the Federal Reserve tightened monetary policy in an effort to slow economic growth (light blue bars, with grey ovals indicating monetary policy tightenings). The anticipation that efforts to slow

the economy would result in lower future earnings impacted REIT share prices, and caused a negative correlation between REIT returns and interest rates during these periods of Fed tightening.

The correlation between REIT returns and interest rates has turned negative again over the past two months, perhaps in response to a perception that the Federal Reserve will soon begin raising interest rates. Yet Fed officials have been clear that they are committed to maintaining low interest rates for the time being, as they view the downside risks to economic growth to be greater than threats to price stability, especially with employment still well below pre-crisis levels and with factory capacity utilization several percentage points below long-term averages.

A relatively benign outlook for Fed policy, combined with the significantly reduced REIT exposures to interest rates discussed above, suggests that REITs will in fact be robust regardless of interest rate moves in the months ahead.